The latest 2015/16 migration numbers have provided a strong indication that housing affordability may be having an impact on the population in Sydney.

Typically, Sydney gains from overseas migration and loses population from interstate migration. This is not a new trend. However, the latest figures show that this appears to be accelerating.

The 2015/16 figures show a net loss of some 23,176 people from Greater Sydney to other parts of Australia. This is the largest internal migration loss of any Australian region by some margin. It is also significantly larger than the historical net loss over the past 10 years which has sat at 19,000. 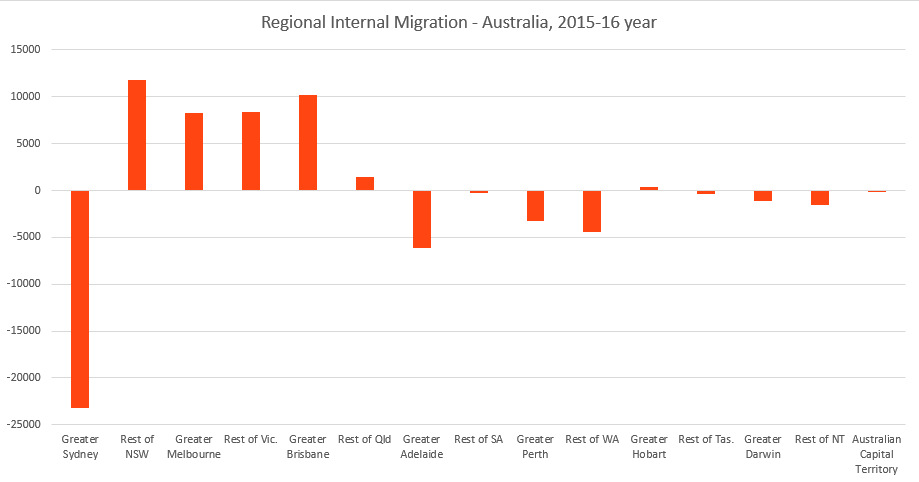 Whilst not definitive proof that this is a direct result of increasing house prices, the trend does correlate closely with increases in housing costs over the period.

The internal migration chart above shows that Melbourne has been one of the major beneficiaries of Sydney’s population loss, gaining roughly 2,400 people from Greater Sydney in net terms.

Sydney’s & NSW’s regional areas were also major draw cards for these population movements, with the strongest migration from Sydney to nearby coastal areas such as Hunter Valley, Newcastle, Illawarra and Mid-North Coast.

What does it all mean?

Whilst not a definitive case of cause and affect in this particular scenario, these latest figures do provide insight into how the Sydney market is tracking and how the relationship between rising housing costs and population changes play in to each other.

These are the types of things we at Riveren analyse on a weekly, monthly and yearly basis, with research forming the foundation of our investment approach and service offering. It’s this data driven approach to property investment that allows us to identify investment opportunities in areas with the greatest medium to long-term capital growth potential.

You can read more about these latest figures here.