National Australia Bank (NAB), the country’s fourth largest mortgage lender, has upped its expectations for house price growth this year to 3.4 per cent.

The bank also expects apartment values to fall less than previously expected, whilst predicting a further rate cut from the central bank to further stimulate the market.

For standalone homes, NAB raised its prediction from 0.4 per cent and reduced the loss it expects on apartment prices to 0.8 per cent from 1.6 per cent previously – noting improved market sentiment from local real estate professionals in its latest NAB Residential Property Index.

In response to weaker inflation and a slow down in the housing construction sector, NAB has forecast the RBA to cut the benchmark cash rate from the current record low of 1.5 per cent to 1 per cent by year end.

In their latest survey, NAB’s head of Australian economics Riki Polygenis noted that “most market commentators have been surprised by the strength in the Melbourne and Sydney property markets in the second half of 2016” and that “because momentum is so strong, that’d coming through in the survey in terms of the broad index that measures sentiment within the survey.”

Ms. Polygenis pointed out that they’re “still expecting a moderation in house prices going into 2017, but it is a modest revision upward” from where they were. 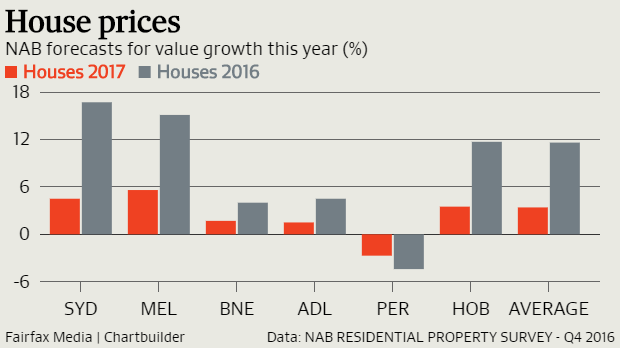 In contrast to many ‘doomsday’ reports on the Australian property market, NAB rejected the possibility of a sharp or sudden fall in prices, suggesting these would only occur if unemployment or interest rates surged which it said was unlikely.

“Sydney and Melbourne will both see solid, albeit much slower, growth in prices, while Brisbane and Adelaide are forecast to cool a little.”

Perth, having suffered from the downturn in the mining sector, slower population growth and ample housing supply, “will remain very weak as house prices decline by another 2.7 per cent this year.”

For units, the report suggested Sydney, Adelaide and Hobart would be the best performers, whilst Melbourne and Brisbane would fall some 2.7 per cent and 1.8 per cent respectfully as a result of an oversupply of new apartment product in the market.

Whilst these predictions appear grim on the surface, it’s important to note that apartment buying is still a viable option for investors, as long as those opportunities are selected in areas outside the immediate CBD and away from high-rise towers.

Retirement: A Reality or A Pipe Dream?

Retirement: A Reality or A Pipe Dream?